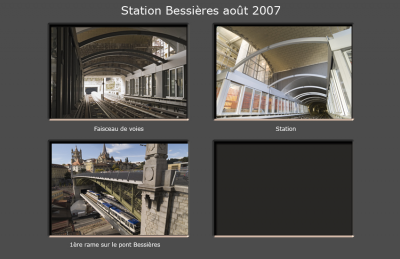 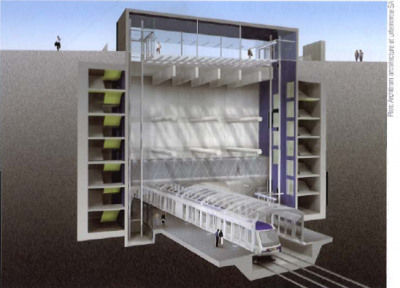 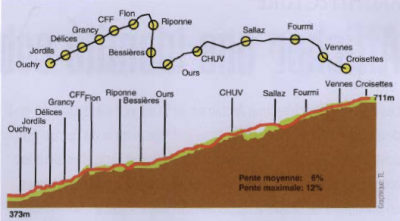 - Underground Transport
- Subway systems, underground light rail, underground rail
750 million CHF
2004-03-01
2008-10-01
- Service quality of the urban environment has to be improved
- Additional traffic capacities are needed for public transport
- Time savings in transport are necessary
- Pollution (esp. air pollution) is not acceptable
- Connections between different traffic modes
This project boosts public transportation in a city characterised by difficult topography and increasing traffic problems. The line links the shore of Lake Geneva (373m asl) with the suburb of Eplinges (711asl), a difference in level of 338m – the reason the line has been referred to as “elevator”.

This project creates an effective urban transport connection between Lausanne (around the lake of Léman) and Epalinges (to the north and higher altitude), connecting to the bus service as well. It serves as a “city lift”, improving the urban transport service and the quality of urban life.

After the project, there are 6000 less cars in the city center, which causes less air pollution in urban environment.
A green corridor is realised between the stations of Ouchy and Grancy.

Except two stations, the others stations are located with a low depth of 5-15m to enable an easy access without lifts and with a natural lighting.

- Unique innovation aspects
- Disadvantages during construction stage
- Other (please specify):
Foster a project culture of optimisation based on the quality-planning-cost triangle.
The M2 project is a real rapid connection between the Lake of Geneva and the higher districts of the city and connects these external parts to the centre. This project modifies the usual relationship between the size of the city and the type of transportation infrastructure; more and more medium size cities in the future will also choose this kind of underground infrastructure in order to distress efficiently the traffic at the surface.
About 90% of the tunnels are excavated in relatively good rock - soft sandstones and marls (Molasse), at a “standard” low depth of 15-25m. Some segments are very shallow and sometimes, in weak water saturated soils (sands and gravels).
Urban Problems / Underground Solutions