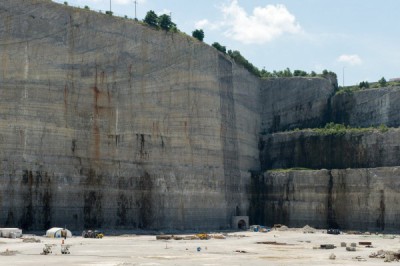 Chicago, United States
The Tun¬nel and Reservoir Plan (TARP), is a series of deep, large diameter tunnels and vast reservoirs. The main goals of TARP are to reduce flooding and to improve water quality in area rivers, streams and especially Lake Michigan.

The first phase consists of 109.4 miles of bored tunnels ranging from 9-33 feet in diameter of rock tunnel with concrete liners, 200-350 feet underground and one reservoir which is up to 300 feet deep and providing storage capacity of 2.6 billion gallons. The first phase is in service since 2006 and is scheduled for completion in 2017. For the second phase two more reservoirs are under construction. This will bring the total storage capacity up to 17.5 billion gallons. Phase 2 is estimated to be finished in 2029 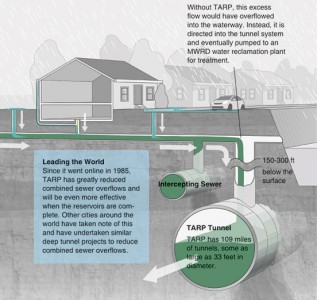 - Sewerage systems
- Storm water relief systems
- Tunnels for waterways
$4.0 billion
1985-01-01
2029-12-31
2006-01-01
- Service quality of the urban environment has to be improved
- Pollution (esp. air pollution) is not acceptable
- Protection from natural hazards (flood, storm, earthquake, etc.)
The Tunnel and Reservoir Plan aims to reduce flooding in the metropolitan Chicago area and to reduce the harmful effects of flushing raw sewage into Lake Michigan by diverting storm water and sewage into temporary holding reservoirs.
- Quality of life
- Environmental impacts
- Financial restrictions
Prior to 1972, the wet weather overflow from the combined sewers was diverted to waterways. Overflows to the waterways were occurring approximately 100 days per year, causing substantial waterway pollution. In 1975 it was decided that this pollution was not acceptable anymore. This resulted in the first phase of TARP that prevents an estimated 85% of CSO pollution right now and when the entire project is complete at around 2029 it should prevent even more CSO pollution and save over $130 million of annual flood damage.
The tunnels and reservoirs are built in a Dolomitic Limestone. This is a sedimentary carbonate rock with up to 50% of the mineral dolomite. It is less soluble than normal limestone.
Urban Problems / Underground Solutions